Given to the Sea (Given Duet) Kindle Edition!
By Mindy McGinnis (Author)

Hey guys. I’m Maria and this is my spoiler free book review for Given To the Sea by Mindy McGinnis.

This is a YA high fantasy book and I was personally really anticipating this release because Mindy McGinnis is one of my favorite authors.

I’ve loved all of her other books and this is her first time writing fantasy, so I was really curious to see how she would do it.

The first thing I want to say about this book is please ignore the Goodreads summary and even ignore the official summary that’s on the book jacket because they’re too convoluted and complicated.

You’re not going to care about how they intertwine until you just get into the story so what I want you to know about this book is that this is a fantasy world set on one island and the sea is angry.

These people believe that the sea is like this alive entity and it’s coming for them.

There is one family bloodline that has been cursed where every generation a woman in that bloodline is going to have the urge to walk into the sea.

They believe that her sacrifice will please the ocean, giving her life as a sacrifice to save the rest of the world basically.

The catch is, our Given character has to have reproduced first because it’s a curse through her bloodline.

So if she doesn’t have an heir that means the next generation is not going to have their Given to go into the sea.
And in this book one of the four characters that we follow is this generation’s Given.

She already has that urge to walk into the sea but she has not had a child yet.

That’s the gist of the story. I think that’s all you really need to know about it.

It’s about a living ocean that’s trying to take over this island and how the people are trying to combat that.

I do want to also mention some of the themes that are pretty heavily present in this book.

Because we’re following the Given and she has to have a child before she can make her sacrifice, there is this underlying theme throughout the whole book of like everyone is obsessed with when is she gonna have a child?

And it’s supposed to be her choice but because she hasn’t made that choice yet there are some men in this world and the society who would force her.

So this is an examination of rape culture, which is a topic that all of Mindy’s books have either examined straight on or they have mentioned in some way and I do think that if you are familiar with her book The Female of the Species which was a rape revenge story in a contemporary setting, a lot of the themes in that book are also present in Given To the Sea, it’s just dealing with it in a fantasy setting.

And because it’s dealing so heavily with rape culture there is one scene of attempted rape which is pretty unsettling to read, and I do also want to give you another content warning that there are two descriptions of like animal abuse.

Another thing I want you to be aware about this world is that Mindy has taken some real life issues that we all know and some of us deal with in the real world and inserted them into her fantasy society.

She is showing us a sexist, racist, and ableist society that does have systemic oppression and prejudices.

I personally felt like the three main characters that we’re supposed to view as the heroes of the story, they were combating these ideas, they didn’t believe in them.

The world may have these traditions but these three characters know that they’re wrong and want to break out of them.

For my personal review of this book I ended up rating it four stars and on my rating scale four stars means I liked more about this book that I disliked about it but it’s not a favorite. 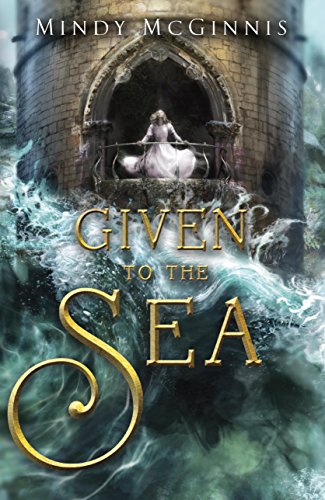 Given to the Sea by Mindy McGinnis

My favorite thing about this book was I loved the world and the world building.

I think she did a really great job with it. I loved the idea of the ocean being alive and being the threat in this world and seeing how all these different groups would go about fighting it versus fighting each other maybe.

I loved the politics of this world, the alliances that were made. I felt like I truly understood the history, and the traditions, and the current motivations of all these groups of people.

Because this book is set on one island, it’s a very limited scope and there’s no magic system.

We have one character that has some form of magic but it’s pretty easily explained so you’re not learning a big magic system and I never felt like anything was over explained or under explained.

I just felt like I got it. So I really was a fan of the world and the world building.

The thing that I did not like about this book honestly was just this one character’s point of view.

The guy that’s more the villain.

His chapters are in third person point of view, whereas some of the characters are first-person which was just easier to read.

His chapters were harder for me to get into. I didn’t really connect with his character. I just didn’t like reading his chapters and when I would get to one I would be like, ‘oh, I’m not into this.’

So that kind of slowed me down with the rest of the story but I definitely see why his perspective was needed and I do think that it added a lot. If he had just been taken out of the story we would not have understood anything by the end of this.

Another thing I did not really like was the romances in this story.

There is a love… square in this book and it’s not like full of fluttery, fluffy romance or anything like that.

You know, it’s like that kind of a complicated thing, and although none of these things were like built up that far I just really really hated one of the pairings.

Lastly I want to talk about whether or not I think you will like this one and maybe how you can determine if you will or you won’t because I have seen a lot of reviews that have said they had a lot of trouble getting into this world or they didn’t like the world-building.

That is not the experience that I had at all. I had no trouble with it but I do think a couple of things that will influence whether or not you like this one are going to be one do you like multiple point of view stories?

I do think maybe frequent point of view switches might kind of prevent some people from fully getting into it.

Another thing I think is going to help you determine if you’re going to like this one or not is what kind of fantasy do you like?

If you like political fantasies I think you would enjoy this one but if you prefer fantasy that’s full of tropes, full of a lot of romance, big magic like sorcery, hidden princesses, and epic hero’s quests, and that has a really broad world, this book doesn’t really have any of those things so it may not be the type of fantasy that you would enjoy.

Those are all my thoughts on Given To the Sea.

If you guys have read Given To the Sea or you’re looking forward to it I would love to hear from you.

Thank you so much for reading and I will see you in the comments. Bye!