Hi everyone, I’m Maria and this is Promotekdbook.com.

Today I’m going to be talking about Enchanted Island by Allison Amend.

This is a book that I got in the Book of the Month unboxing.

If you read that post you would have seen this book.

And it was the book I was kind of the most excited about in the bunch.

And then I saw Max from welldonebooks read it and then review it and he really enjoyed it.

So it kind of made me want to pick this one up even more, so I did.

This is a historical fiction novel and I’m going to read you the little blurb right at the top of the flap which is something that I read in the Book of the Month unboxing.

It says inspired by the mid century memoirs of Francis Conway Enchanted Islands is the dazzling story of an independent American woman whose path takes her far from her native Minnesota when she and her husband, an undercover intelligence officer, are sent to the Galápagos Islands at the brink of World War 2.

So when I read that I kind of made the assumption that this was going to be a spy type book, but that isn’t really what this is at all.

Francis is born in 1882 in Duluth in Minnesota.

And you get to watch her just basically grow up and the choices that she makes in her life.

And the main relationship in this story is not between her and her husband, but it’s actually between her and her best friend, Rosalind, who they meet when they’re little kids and they grow up together and through various events the end up becoming separated and then reuniting and separating and reuniting over the course of their lives.

When you start the book you actually are meeting up with Francis and Rosalind as they are significantly older, living in a retirement community.

And Francis is basically reflecting on her life and all the things that happened.

Because she lived in the Galapagos Islands and worked for an undercover agent a lot of the work that they did to help the United States prior to World War 2 and during World War 2 are not really recorded anywhere because, you know, it’s all top secret.

So she decided to basically write her own memoirs or to take account of her life so that way they would be a record somewhere.

I really enjoyed this book despite the fact that I went in expecting something completely different.

The writing in here is really fantastic.

I felt completely drawn into the story of Francis.

There are multiple things that I really enjoyed about this book.

The first is the friendship between Rosalind and Francis.

They don’t get along all the time.

Some really big events happen between them that cause their friendship to sort of separate.

But Francis is also really honest about how much Rosalind means to her and how much her friendship and that relationship means to her.

The other thing that I really enjoyed about this book that is probably my favorite part is just Francis herself.

This is such a unique story.

First of all the main character’s like over the age of like 80 when you start this story.

So you know finding a woman over the age of 80 narrating a story feels really weird.

And even though you do flashback in time and you get to see her as your younger self, a significant portion of the book actually takes place when she’s over the age of 50, which again is another thing that’s very, very surprising.

And I don’t want to spoil too much about the plot and the story itself, but she lives an extremely untraditional life in a way that literally you wouldn’t expect at all.

I think that it is just absolutely fascinating and just a fantastic representation of just a different path that you can take a life that I just found to be so refreshing. 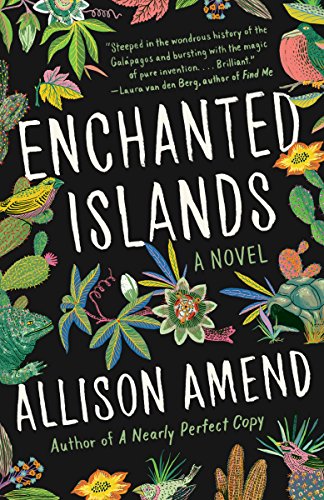 Another thing that I really enjoyed about this book is that Francis didn’t lead a necessarily extraordinary life prior to moving to the Galapagos Islands.

She definitely did things with her life and she, you know, lived across the United States, which is definitely more than a lot of people do especially during that time period.

And outside of a couple of like major events that happen in this story, her life is pretty quiet and I kind of like that fact about her.

But that’s not what this story is about at all and that’s what I loved about it.

And it really is about the sort of more quiet moments, the more mundane the day-to-day living.

That’s what made this book so extraordinary, is that it took these ordinary events and just really pulled you into their lives and made you care a lot about these characters.

There are plenty of things in this book that I could see like sort of irritating people.

Francis is very naive in this story.

There are lots of plot points in this book that I saw coming from miles away.

But she also kind of admits that herself.

Because she has sort of like writing her own story down, she’s reflecting on everything and so she comments on the fact that she’s an extremely naive character and she doesn’t even know herself how she missed some of the things that she missed.

But I can see that sort of getting on people’s nerves.

You know she’s not perfect, Rosalind is definitely not perfect, none of the characters in the story are perfect.

They’re all completely flawed and I can see that, you know, bothering some people.

Personally I found it to be very refreshing to see these sort of honest and flawed and just messed up people just trying to do the best that they can.

I was really surprised by this book.

This is a book that I would have never picked up if it wasn’t sent to me.

If you’re someone who likes character development or character-based stories more than plot, definitely pick this book up.

I’m personally someone who kind of avoids World War 2 historical fiction at this point because I feel like it gets overdone, but this book actually takes place in the period right before World War 2 more than anything else, which I actually like.

And it obviously does take place during World War 2 but that isn’t as much of a chunk.

So if you’re someone who’s like specifically really into World War 2 historical fiction, you can still pick this up but it isn’t really about that.

But yeah if you’re someone who likes historical fiction at all, then this is definitely one worth picking up.

It’s a very quiet book but I completely fell into the story.

I read the whole thing in about 2 days.

So yeah those are my quick thoughts on Enchanted Islands.

Or if you have any questions about this or about Book of the Month, feel free to leave that down in comments below.

Again I’ll have a link to the Book of the Month unboxing post in case you want to see the other books that I got.