Today I’m going to be doing a book review on Panchinko by Min Jin Lee.

Longlisted for the National Book Award. This is a hot release. It just came out in February. I got it in my February book of the month box.

And I really enjoyed this book a lot.

And I want to highly recommend it to people.

I think there were a lot of people who are picking up this book from book of the month.

And then when I posted a picture of this on Instagram a lot of people are really interested in it because this cover is like gorgeous, which is completely understandable.

And I’m here to say that picking it up just based on the cover I feel like will lead to good results. So this is a multi-generational family story.

It follows a family of Koreans who are living in Japan starting in like the early 1900s through about the 1980s.

So you follow about three or four different generations over the course of that time.

I really enjoyed this book a lot.

It reminded me a lot of Homegoing by Yaa Gyasi, which was my favorite book of the last year.

I don’t think it’s quite up to that standard but I still think it’s a really fantastic story.

It was really surprising to me how quickly I connected to the story.

I’m not completely sure how but Min Jin Lee makes, made me care about this family almost from the very beginning.

I think because she creates a very sympathetic character in the beginning of the story, at least in my opinion, and then you get to see them have their family.

And so you become attached to this family because of this way that this first generation was.

At least that’s how it was for me and so I really cared about all the other generations that you got to see.

And you get see sort of like offshoots of them as well.

So it’s more than just following this one single family line down.

You get to see little bits of the offshoots here and there. 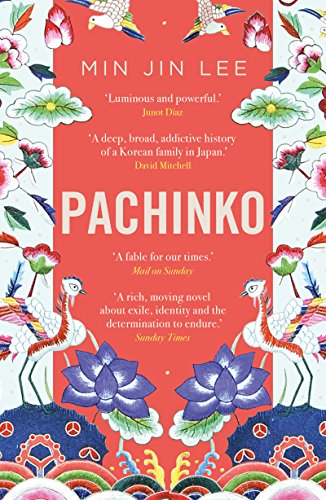 There are a couple of characters that you come across where you don’t really understand where they’re coming from.

But I think that’s because of the culture there. I think that one of the best things about this story is that it talks about the experience of being a Korean in Japan because that’s something that personally I don’t have a lot of experience with or know a lot of the history.

But there’s apparently a lot of tension there and a lot of discrimination that happened towards Koreans especially like after the world wars and such.

There was a lot of like poverty and struggle for Japanese people during this time and a lot of them took it out on Koreans.

They see Koreans as like second-class citizens and seeing how even Koreans who are like born in Japan are not considered like Japanese citizens, which is like so different obviously than the way it is in the United States.

Obviously you know, the United States has plenty of problems.

But you know like if you’re born in the United States you’re a U.S. citizen like by law.

But that’s not necessarily how it is in Japan, which I found so fascinating.

Obviously everyone knows that I’m a sucker for stories about immigrants, even if they’re not immigrants in the United States.

And so this completely played into that so well and is part of the reason why I loved it so much.

There’s also a lot of really great discussion in here about family and who is like considered family and the people that you love in your life and things like that which I just love so much.

There’s a lot of really complex feelings happening in here.

This is not like a black-and-white book at all, which I really, really love.

Then yeah, this book is really well done.

I give it a 4 out of 5 stars. Like I said, I didn’t love this quite as much as Homegoing, but I think that if you liked Homegiong, you will enjoy this one as well.

So yeah, those are my quick thoughts on Panchinko by Min Jin Lee.

I’d love to talk about this with other people.

I know there are other people who picked this one up from book of the month.

Or if you have any questions about the book obviously you can leave that down in the comment section as well.