Today I’m going to be doing a book review on The Secret Place by Tana French.

This is the fifth book in the Dublin Murder Squad series.

I know at least have it for In the Woods and The Likeness.

So I will leave the links to the reviews that I have up down in the post below.

The great thing about this series is that you don’t necessarily have to read them in order.

But i think it actually is better if you do.

Because while you follow a different detective in each of these novels, you meet the detective that you’re going to following in the previous novel.

So the detective that you are following in this one is Detective Stephen Moran who we found out about in Faithful Place.

Detective Stephen Moran has been waiting for his chance to be able to join the Dublin murder squad.

And then one day 16 year old Holly Mackey comes to him.

Holly Mackey is the daughter of Frank Mackey who is the main detective that we followed in the last book.

And it was sort of this unsolved murder.

And so Stephen Moran along with Detective Antoinette Conway head off to the boarding school.

Detective Conway was the lead detective in the previous case and got a whole bunch of flack because it was one of her first major cases and it went completely cold.

And so they head off to the boarding school to try to figure out whether or not this clue is legit, where it came from and to try to see if they can finally solve this murder.

This book is really different from all of the other Tana French books that are out so far.

Usually with Tana French’s mystery books it takes a little bit of time to be able to figure out obviously who the killer is in each of those situations.

This one is different in that it takes place over the course of about like 12 to 24 hours total.

And so you are following this timeline as the detectives are at the boarding school trying to figure out what happened.

But every other chapter also flashes back in time and so you see some scene in the boarding school that provides you as the reader a little bit more information about what actually happened.

So Tana French is able to create this sort of suspense because the reader very often knows a little bit more than the detectives do.

And so in this situation you are actually sort of waiting to see how and if the detectives are going to be able to figure this out or to be able to like find out this information.

Another thing about Tana French’s books which I think makes them stand out from all other mystery books is that she’s someone who focuses a lot on character development.

And usually it’s the main detective that you are digging really deep into.

You usually learn a lot about the detectives’ past and their relationships with the other detectives that they work with.

But in this one Detective Stephen Moran actually is more like a side character.

The characters that you’re learning about in this book are actually like the girls who are attending the boarding school, which I thought was a really interesting choice and i think is part of the reason why I enjoyed this book so much.

I love a good boarding school book and I love a book that does a deep dive into teenage girls really well.

And so I think that’s really what drew me into this book more than the murder itself.

I think The Secret Place is one of the more divisive books that Tana French has ever put out.

I saw so many people who were on like all sides of the spectrum when it came to rating and reviewing this book.

Some people really did not like this book and I can completely understand why.

Because you know Stephen Moran isn’t really anything to write home about.

And the mystery itself while dominant I felt like for me at least the part that most compelling were reading more and more about these teenage girls and about their friendships and about their relationship with each other and with the boys at the other boarding school and just the rivalries and the different cliques and all of that sort of stuff.

Those storylines really ring my bells and so that’s why I think I love this book so much.

This book, it does require quite a significant amount of suspension of disbelief.

If you read The Likeness you know that there is a pretty decent amount of suspension of disbelief that you need to have a while reading that book. 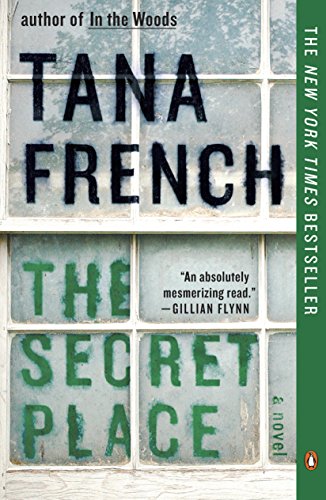 The Secret Place by Tana French

This one requires even more than that, which again is another reason why a lot of people probably didn’t like this book.

But I was actually completely okay with it.

I don’t want to go too much into detail about like how and why you need to suspend disbelief because I feel like that’s sort of part of the mystery.

But if you are someone who likes their murders to be extremely straightforward murders as if you guys are all out there murdering people.

If you’re someone who likes their mystery novels to be really straightforward that you might not like this both quite as much as all the others.

However to me I felt like in Broken Harbor and in Faithful Place the mystery themselves were such a large part of the story.

And I feel like with The Secret Place because Tana French takes such a different angle and such a different twist on it I think again I enjoyed it so much more than I thought i was going to.

But I felt like Faithful Place and Broken Harbor while they were very good they just felt kind of like average or a little bit above average.

And I felt like the extra twist in this book made me love it a little bit more.

But again your mileage may vary just depending on what you want out of the Tana French books.

If you’re someone who like campus novels or you like boarding school books then I think that this one would actually be a really good one to pick up because it has all of those elements but it just has a slight mystery to it as well.

Even if you haven’t read any of Tana French’s other books, I still think that this one is worth picking up.

Again I really enjoyed this book.

I thought the girls in here we’re just so fantastic.

I would read an entire story just about their friendship.

If Tana French wants to write that book as well that would be great.

That could be a future Dublin murder squad book.

Holly Mackey is obviously on her way to becoming a detective or a police officer.

And so it would be great to see her growing up and maybe reconnecting with these characters.

Maybe I should like email Tana French or something cause the more I’m talking about it the more I’m liking it.

If for some reason you’re reading this and you haven’t read any Tana French books, pick them up.

Just pick them up already.

I really enjoy them.

I think that even if you’re someone who doesn’t really read a lot of mystery novels her books would definitely appeal to you because again it’s more about the character development with Tana French’s books than it is about the mystery.

So yeah those are my quick thoughts on The Secret Place by Tana French.

If you’ve read this book feel free to leave a comment down below letting me know whether or not you liked it or disliked it.

Even if disliked it, feel free to tell me why because I always like seeing sort of like opposing opinions to me when it comes to reading books especially book that I really enjoyed.

I kind of like to see what are the flaws that really stood out to them.

Or if you have any questions about this book or any of the other books in the series you can always leave that down in the comment section as well so yeah that’s all I have for now thanks for reading.