Lily and the Octopus Kindle Edition By Steven Rowley

Hey! What’s up, you guys? It’s promotekdbook.com, and today I’m gonna be doing a book review for Lily and the Octopus by Steven Rowley.

If you guys don’t know. Lily and the Octopus follows a guy named Ted, and Ted is a little bit down and out.

He and his partner are no longer together, and he spends all of his time with his dog Lily.
They have game nights, and they watch TV together. And they have a schedule that every Thursday they talk about boys, and they discuss which Bradley is better than this other Bradley.

And they basically just compare celebrities against each other and talk about how cute they are. It all changes when one day Ted notices that Lily has a growth that is growing above one of her eyes and he immediately identifies it as an octopus. It follows him, Lily, and the octopus throughout this story.

So it is a part of that whole genre of heartbreaking dog book. If that is something that is gonna really affect you, know that going in.

My first pro for this book is that I had no idea that the main character Ted is actually gay. I don’t know how I didn’t know that this was an LGBT book, but it is. It is also an own-voices so Stephen Rowley is gay himself.

I really love Ted and Lily’s relationship, and there are so many references towards the very beginning of the book that were cracking me up so much.

Ted is a very sassy character, and he gives a lot of people a lot of shit all the time especially his therapist. Admittedly some of the references went over my head like I had no idea what they were talking about, but some of them were cracking me up. So I thought that it was hilarious.

I’ve read this as an audiobook so I can’t really talk about how the writing read for me, but the narrator of the audiobook was spot-on. He does Ted’s sassy comeback, smart-aleck attitude extremely well, and it comes across perfectly. 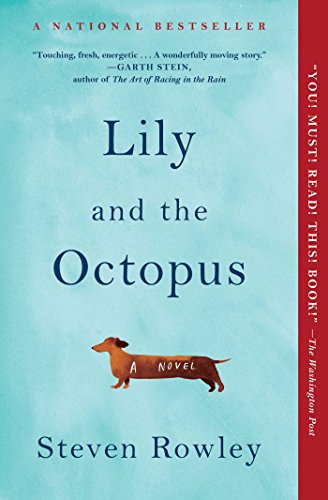 Lily and the Octopus by Steven Rowley Kindlecover

It’s one of those things where if you have a dog, you understand when your dog comes up to you and he gives you a certain look, you know exactly what the dog is wanting. Like, when Nook comes up to me and he wants water, he’ll just lick the air while looking at me, and I’m like, “Okay, he needs water.”

Or if he’s hungry, I know exactly the type of look that he gives me for that, or if he has to go outside, I know the looks for that. So Lily and Ted have conversations all the time. Ted is really attuned to Lily.

He’s able to understand exactly what she’s thinking, and he also puts thoughts into her head because obviously a dog is not going to be talking about how cute some celebrity guy is. But it was funny to see them interact, and I really enjoyed that part of the story because Lily’s voice is kind of Ted’s conscience basically.

Lily is like the Jimmy Cricket character for Ted if Ted was Pinocchio. I thought that with Lily being able to speak in this book that it could have gone on some shaky ground, but he does a really good job of having Lily have an infinite amount of love for Ted but then also an appropriately short attention span.

Lily loses track of conversations, and she stops paying attention to whatever Ted is doing a lot. And I thought that was hilarious because that’s how dogs are in real life. I thought that Ted and Lily’s relationship was very relatable because I basically spend all my time with Nook.

And I don’t really spend that much time with anyone else. And there’s only a few people that I actually spend time with almost as much as I spend with Nook. I just can relate to wanting to spend more time with dogs and less time with humans. 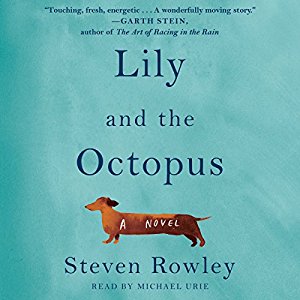 Lily and the Octopus by Steven Rowley Audiobook

It was emotional like I thought it would be, but a pro for me was that it didn’t just end as a devastating book. There is a little bit of an uplift towards the end of the novel, so you’re not just devastated and then left to be sad.

You are given a little bit of hope at the very end which keeps you going throughout your day. I mean, don’t get me wrong, I love soul-crushing books, but sometimes it’s better to not be completely crushed and laying on the ground after you finish a book.

Now I’m going to talk about a couple of cons that I had. There’s a weird section in the middle of this book that is completely unnecessary.

Ted decides to start hunting down the octopus that is on Lily’s head. I don’t know if it’s just a break with reality or something like that because it was super freaking weird. And it didn’t really do anything for the story.

He just kind of exits his life for a little bit, and then nothing really comes from this exit. And then he has to jump back into his life, so I don’t know what that was about. It could have been [that] you can try to get away from your life, but you really can’t get away from things that you have to deal with., and you are pulled back to reality. I don’t know, but it was really weird.

And I didn’t really like that part. I also thought that Ted hung on to this octopus concept for way too long, and it was used a lot… basically the entire book. Everyone knows it’s a tumor. Everyone knows that Lily has this tumor on her head.

He just keeps calling it an octopus, and it continues for so long!

I’m like, stop! Just deal with the tumor already, and just call it a tumor!

Ahh! I understand why you wouldn’t want to accept that your dog has a tumor. I luckily – knock on wood – haven’t had no deal with anything like that yet. He’s only three and a little bit, but I don’t think that you would deny it for so long.

It takes a very, very long time, and I just didn’t appreciate how long and how stubborn he is about calling it a freak in octopus!

A little con was that I think that the therapist could have been portrayed better.

I don’t know. I mean, there are bad therapists don’t get me wrong, but I think that it’s important to portray good therapists in fiction as well so that people that do need them feel more comfortable going to a therapist and talking with them.

In this book he completely discounts this therapist and doesn’t really participate in anything she has to say. You know he likes going and he likes ranting about his life. He likes being forced to tear down some of these walls and get some things off his chest, but he makes fun of her the whole time. 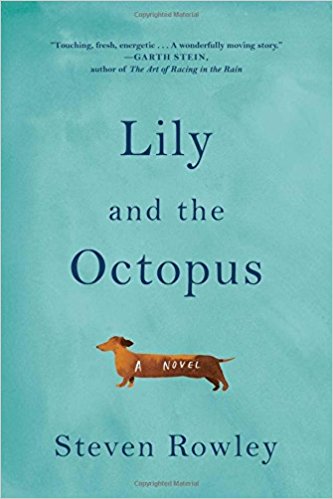 Lily and the Octopus by Steven Rowley Hardcover

I don’t know. I didn’t love it that much. As I said, it was a small con, but it did affect my reading experience just a little bit.

And my last con was I thought that this book was a little bit too long.

It’s not actually that long of a book, but at around 70%, I just wanted it to be over. That could have been because of this holding on to the octopus word, and I was just getting fed up with it. I think this book could have been a little shorter and just as impactful.

There seemed to be a little bit too much extra just fluff. I would have rathered the story focus in on Ted and Lily and what was happening as a direct result of Lily having this octopus.

Overall I did really enjoy my experience while reading this novel.

I ended up giving this book three-and-a-half stars, and I definitely recommend it for dog people and people that enjoy very sassy quick-witted characters because that’s definitely what Ted is. And obviously if you like dogs, you’re probably gonna like this book as well.

I do recommend it. So that’s gonna be my review of Lily and Octopus by Steven Rowley. If you liked it, please give it a big thumbs up and comment down below if you’ve read this book. Have you read any other dog books that you would recommend to me?

I think the next one I’m gonna check out is The Art of Racing in the Rain, I believe is the title of it. If you want to check out any of the other dog book reviews that I’ve done, I’ll leave them down in a playlist in the description, and anything else you want me to know, leave it down below.