Hey! What’s up, you guys? It’s promotekdbook.com, and today I’m gonna be doing a book review for Our Dark Duet by Victoria Schwab.

I did a book review for the first book in the series which is right here, and I’ll leave that linked up in the card symbol and you can check it out if you would like to.

But today we’re gonna be talking about Our Dark Duet. This duology is set in a city called Verity, and in Verity violent acts create actual monsters and have actual repercussions.

They feed on impure souls by playing music which brings the soul to the surface of the body, and then they consume it. In this series you follow two characters. You follow a girl named Kate who is the daughter of one of the leaders of Verity. The city of Verity is split into two different parts.

One is controlled by this guy named Callum Harker who is Kate’s father. He’s a very corrupt leader, and he sells people protection from the monsters instead of guaranteeing protection for all of his citizens. Kate wants to follow in his footsteps and act more monstrous. The other character you follow is a boy named August, and he lives on the other side of the city.

And he is the adopted son of the leader on that side Flynn, and August is actually a monster. He’s a sunai, and so he feasts on people’s impure souls. And it follows these two as they’re living in this city that’s been divided for so long.

The two sides are at war against each other, and they are trying to just make it through. As usual with my book reviews, I’m gonna go through my pros, go through my cons, give me my rating, and be done.

My first pro for this book and I guess Victoria Schwab in general is that I think she just has a very creative mind, and I really like all of the ideas she comes up with for novels the idea that music brings the soul to the surface of a human and then these monsters are able to consume those souls; the idea that monsters are created from violent actions that humans are creating so they’re creating their own monsters physically instead of, like, mental monsters that people have in their heads; the different types of monsters; everything like that. 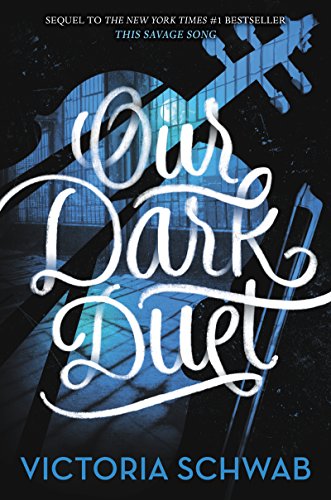 I really loved the idea of the world. It has so much potential and I feel that same way with a lot of her other books at least the ones that I’ve read… which is Vicious.,I read the first two books in the Shades of Magic series, and I read her Achived duology/series?

It never got finished… but then I don’t really love the execution as much.

Victoria Schwab is a little bit like Garth Nix for me where I love the ideas that Garth Nix comes up with but then I’m never wowed by any of the books when I actually do read them. That’s kind of what happens every time I pick up a Victoria Schwab book except for Vicious. I did really enjoy Vicious. So pro number one she’s super creative.

I love her ideas, and as a person, she’s a great person as well. I follow her on Twitter. She’s awesome. Another thing that I liked about this book was that there’s a new monster that’s introduced. This monster is way different than all of the other monsters that we have come across in the first book, and with this one they don’t really know how it was created.

I love August. August was the best character in this book. I really enjoyed reading his perspective, and all of the point-of-view chapters that he was the leader of, I was down for those. I really enjoyed them.

Therese Plummer? And the last pro that I’m going to talk about for this book is that I really enjoyed some of the side characters. Ilsa is my favorite character in the whole series. Her ethereal presence is something I just really enjoyed whenever she was on the page. I also enjoyed August’s father Flynn as a character in this a lot more.

That’s it for my pro. Now let’s talk about my cons.

My first con is that Kate is not in Verity at the very beginning of the book – that’s not the con – but she has some friends that are in Prosperity, and I feel like those friends were a huge missed opportunity. They could have been so important to the story, and they just weren’t at all. There’s literally no reason for them to be in the story, and because of those friends, it actually makes me hate Kate a lot more. I do not like Kate. 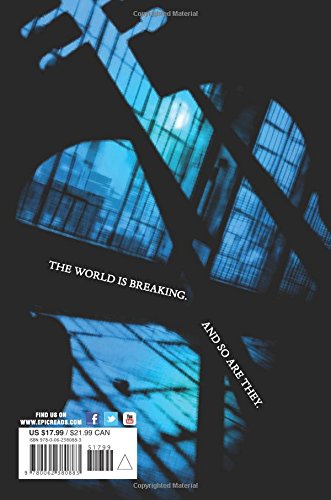 I think she is a very annoying character, and I know that just saying someone was annoying as a cop-out. But she is so annoying about everything. Her motivations make no sense at all throughout the entire series. She does not make one choice that makes any type of sense… ever. At the beginning of the book she’s like, “I hate people. blah blah blah. I hate having friends. I would never want to have friends.” She, like, ends up running back to Verity to save people. Whatever.

If she hates people so much, she shouldn’t even care to go back to Verity to save people. She should just keep going . She just makes no sense. I don’t know why in the first book she wanted to be so monstrous. That didn’t make sense at all, and she made little sense in this book as well. So she… sucked. I just hate her.

I just hate Kate. She’s not cool . She’s not a rebel. She’s just a spoiled brat with a superiority complex and no self-preservation. I think that is one of my biggest cons with this series is that one of the main characters that you get the most point of view from is intolerable, and I didn’t like her. So it affected my reading experience a lot. I thought that although the secondary characters got a little bit more time, they were not fleshed out at all. I think Victoria Schwab has a little trouble fleshing out side characters.

I thought Ilsa was gonna have such a bigger impact on this book, and she just doesn’t. And it just is so frustrating to see so much potential, and then it not really do anything. If she really fleshed out these secondary characters, I would care about them a lot more and I would care about the the entire world and the entire plot a lot more. I would be able to connect to the people of Verity as a whole if you’re able to connect with multiple characters in that world, but because the only character I cared about was August, I didn’t care about Verity.

I didn’t care about if everyone died because I didn’t like anyone because they weren’t real people to me. They were just these characters that were floating around just hanging out. I usually say one of my pros is that Victoria Schwab’s writing is so easy to get into and to get through. You can read her books very quickly, but in this one I started getting so frustrated by the number of times something is described and then described again and then described again in very similar terms.

She would say something like, “She completed a sentence. A group of words. Something with a noun…and a verb.” And I was just like, “This is too much! This is happening so often that I am rolling my eyes at least once a chapter because it’s nuts how many times that happens.” I wish I had started counting at the beginning of the book because then I would be able to actually show you guys exactly how many times it happens because it’s so many!

I felt like the writing in this was trying too hard to be dramatic and important in some way, and it just missed for me. And I also thought that there was less musical terms that were involved. I remember one of my pros for the first book was that I really liked how they kept this music thing going throughout the whole thing. I didn’t notice them nearly as much in this. I could have been focusing on describing the same thing over and over and over again in three different segments but saying the exact same thing that I missed them.

But I didn’t notice them as much in this one, so that was a con. There are so many parallels between this book and Twilight. I at some point just started laughing because it was so similar.

It could have veered so far away from this Twilight vibe that was happening in the first book, but it went straight for it and kept it going. Not that Twilight didn’t do very well. Obviously this book is well loved, so I think Twilight might still be lingering around in people’s minds. But I didn’t personally like it.

And the last con that I’m gonna talk about is that it just seemed like the characters were bopping around during this book. There wasn’t a clear goal that anyone had and was working towards consistently. 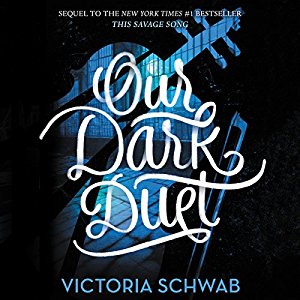 And then they had to react to it. One pro I forgot to mention was that I did like the ending of this book. I did like ending because it was very satisfying! I saw it coming, but I’m glad that it ended that way. So…great ending. So overall I had a decent number of cons. I had some pros though.

Would I recommend this?… it depends. I saw so many people review this book with “it devastated me. It broke me. It killed me.”

So I would recommend it because it seems a lot of people enjoy it, but I wouldn’t have as high of expectations for it because I think then you might be disappointed. So that’s my review on Our Dark Duet by Victoria Schwab. I do not know why I was a little more salty in this post than I was expecting to become.

If you liked it, please give it a big thumbs up and comment down below if you’ve read this duology before. Did you have similar thoughts to mine? Did it break you? Did it devastate you? Are you now dead?