Signs Preceding the End of the World by Yuri Herrera | Book Review - $6.47

Today I’m going to be doing a book review on Signs Preceding the End of the World by Yuri Herrera.

This is a book that’s been translated from Spanish and it was translated by Lisa Dillman.

This is a book that I had heard nothing but amazing things about prior to picking it up.

And so I was super excited to pick it up myself and I’m just going to tell you right off the bat that I really, really enjoyed it.

In this story you are following this woman named Makina who lives in Mexico and her brother had recently left Mexico and smuggled into the United States because there was supposedly this piece of land that belonged to their family that he was hoping to recover.

But he has been gone for a little while so Makina’s off to the United States and is going to be smuggling her way in as well to try to find her brother to figure out what’s going on and try to convince him to come back home.

Of course, to be able to smuggle her way into the United States she has to deal with some not so great people.

Because she needs, you know, a way to get in and a way to make sure that she can get to her brother and to figure out even where her brother is, things like that.

This is a pretty short book, it’s less than 300 pages long.

I read it all in one complete sitting.

I believe I read this during Dewey’s 24 hour readathon, I’m not completely sure.

But I know for fact that I just read this in one night just straight through and it was so good.

I will say that this style of writing may not be for everyone.

The style reminds me a lot of Cormac McCarthy.

If you are one of those people who gets really annoyed at the lack of quote marks in a book then I would recommend that you not read this book because there are no quote marks in this one either.

But that’s just a style that I don’t really mind that much.

Yuri Herrera does such a fantastic job of painting a picture with as few words as possible.

He leaves a lot of space for your own mind and imagination to sort of fill in the gaps where he isn’t filling them in himself.

The writing in here is very sparse, which I feel adds to the sort of like desperate nature of the story that you’re reading.

I feel like that it also helps add intensity because you know that bad things are on their way but you can’t be completely sure what’s going to happen.

There’s just this sort of silence that you have in this book, kind of like the eye before the storm type of situation where there is a lot of silence and space and quiet because you know something bad is just around the corner.

But the story also does a really great job of describing the sort of situations that people have to go to in order to be able to illegally enter into the United States.

Obviously this is a very hot topic right now in the United States.

Well, not even just right now.

But, you know, it’s an election season. 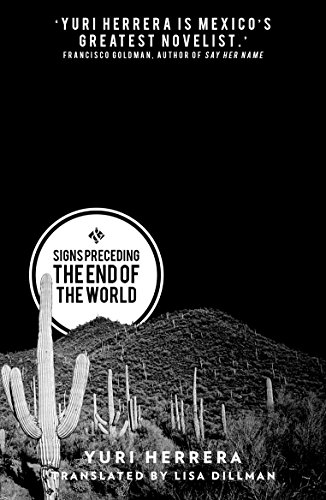 Signs Preceding the End of the World by Yuri Herrera Cover

It feels like a lot of times when people talk about illegal immigrants, they make it sound like it’s this easy trip to be able to come to the United States, but every second of your life is in danger.

And that’s what Makina is facing in this story.

Every second of her life there’s a chance that she could die.

Every decision that she makes, she doesn’t know if it is the right decision or not because she is sort of playing into the hands of these extremely dangerous people and she doesn’t have any sort of guarantee that she’s going to make it to her destination or be able to make it home at the end.

There’s a lot that’s explored in this story in so few pages.

I think that’s another reason why I love it so much.

I love these sort of shorter books that explore so many different ideas and themes.

And Yuri Herrera does such a fantastic job of just highlighting this one character and this one story in order to talk about the bigger idea of immigration, illegal immigration, assimilation in the United States, all of these different ideas are discussed in this book and I think that’s why I loved it so much.

This recently won the Best Translated Book Award and I am completely on board with that decision.

Obviously I haven’t read all of the books that were nominated, but this book is just so fantastic.

I highly, highly recommend it.

I would probably rank it more like 4.5 out of 5 stars.

I kind of want to re-read this book because I feel like there was so much happening in here that I still missed.

And I already picked up his other book, The Transmigration of Bodies, which is also supposed to be really fantastic.

So I already picked up his book which should tell you how much I loved this one.

So yeah, that is my quick review on Signs Preceding the End of the World.

I know some of you guys have already read it.

I’ve been seeing some other reviews here on BookTube.

So I’m glad to finally join the crew and I’m very excited to pick up the next one as well.