The Queen of the Night Kindle Edition BY Alexander Chee

Today I’m going to be doing a book review on The Queen of the Night by Alexander Chee.

This is a relatively new release.

I believe it came out in February.

And I had mentioned that I was reading this in my April wrap up and a bunch of you guys said that you were interested in seeing a review of this, so here’s the review.

This is a historical fiction novel where you are following this world famous, or Paris famous, opera singer named Lillet Burne.

She is very much beloved within the opera world as well as throughout Paris.

She is approached with the opportunity to star in an original role.

But when she finds out more details about the role she realizes that it is almost exactly the plot of her life, which is something that she has kept secret from almost everyone that she knows.

And so she knows that there are only four people that would be able to betray her and tell her secrets.

And so the character is basically going back through her memories and trying to figure out which of these characters is the one who sort of betrayed her.

And it does have a little bit of a mystery element to it.

But it really is just like a historical fiction novel.

The first thing that stands out to me about this book is the writing itself.

Alexander Chee is like absolutely masterful with words in this book.

I was drawn in immediately by just the style of writing.

Historical fiction is not something that I’m normally drawn to but something about the way that this book was written I was just in from the beginning.

He provides so much detail and description.

I really did feel like I was picturing everything that he was talking about.

The amount of research that he must’ve done for this book is insane because the level of details about not just the operas that are featured in here, but also about the time period, about the fashion.

There is a significant amount of description about the fashion and the clothes that are worn by this opera singer.

Which is something that personally I kind of liked but I could see that being something that irritates some other people if you aren’t really into it.

But I feel like he really does paint a picture of this world.

I think that Lillet is such a compelling character.

She is definitely one of those gray characters.

But you can see why she makes those choices and why her life led down the path that it did, which is something that I always appreciate.

If you are going to create a flawed character, you need to at least provide some reasoning behind the choices that they’re making, which allows you to become more sympathetic towards that character.

This is a bit of a bigger novel. 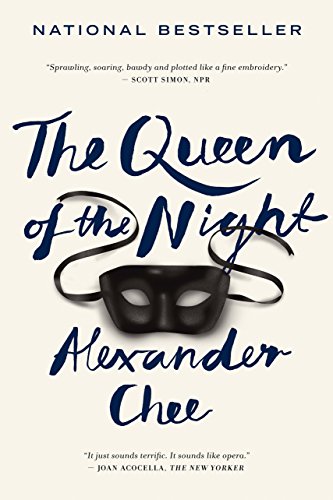 The Queen of the Night by Alexander Chee

And I have to say that the pacing in here was a little bit erratic, at least in my opinion.

When I first started off I was like off and running and I felt like I could’ve just read this entire book in just one sitting.

But then once I got to about the 200, 250 page mark I felt like things really started to slow down.

You got a lot of detail about Lillet’s backstory and about her history.

You basically got to see her entire life unfold and you got to see like past that point as well.

So while there is this sort of central mystery that is part of like the pitch of this book, that isn’t really what this story is about either.

Once you start reading, you realize there’s a lot more going on and there’s a lot that happens you solve the quote-unquote “mystery” of who is behind this story.

Another thing that is really a credit to Alexander Chee is the way that this book really does feel like an opera.

If you have experienced an opera at all you know that they tend to be sort of overdramatic and sort of have those really full, plot heavy sort of stories.

There a lot of emotion involved.

There’s a lot of just really over the top sort of situations.

But you kind of go along with the story and that’s kind of how I felt about this book as well.

Another thing that was a little bit of a flaw, at least for me while I was reading it, was that I had a really hard time keeping track of sort of like the timelines.

Because you are learning a lot about Lillet’s past you jump back and forth between what’s currently happening and what had happened previously in her life.

And there was a point where I couldn’t tell anymore if I was in the past or I was in present day.

Because there’s like certain sections where you are going really deep into her past and then like moving forward through time. 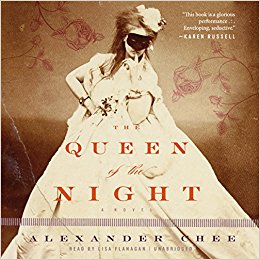 The Queen of the Night by Alexander Chee Audiobook

And the stretch of time that you are covering is so long that there was a point when I was like, I don’t know if we hit the modern day or this is still considered past.

But there comes a point when you are just in the present day and then from there on out it is obviously easy to keep track of the timeline because you just see everything unfolding in quote-unquote “real time”.

It was so close to being a 4 star book for me, but I think just those small little flaws kept picking away at me and there were just certain sections that I think were too long.

I could feel myself sort of waning in interest a little bit and if I didn’t have the motivation to just keep going through it and I just wanted to know how it ended as well.

So those things kind of kept me pushing through but I know that if I had had less motivation I would’ve easily DNF’d this halfway through because there were certain parts that I was just like, man I am just not into the book.

A lot of people said that this book is kind of predictable, which I guess it is if you are paying really close attention.

But I feel like for me there were so many different, I don’t want to say plot twists, but so many different events that happened in the plot that really blew me away that I didn’t think that it was actually going to go there.

The way that the story wrapped up in the end, it wasn’t like a pretty little bow, but it felt satisfactory.

So yeah, like I said, I really did enjoy it a lot.

I would recommend this to people if it sounds mildly interesting to you, give it a try, but I will say that there are parts in the middle that’s going to feel like it’s dragging a little bit.

So yeah, those are my quick thoughts on Queen of the Night by Alexander Chee.

Or if you have any questions about the book you can always leave that down in the comment section as well.