Hey! What’s up, you guys? It’s promotekdbook.com, and today I’m going to be doing a book review for Shadowcaster by Cinda Williams Chima.

The first one is called The Demon King. I did a book review for the first book (Flamecaster) in this Shattered Realms series which I’ll leave up in the card symbol, and you can check it out if you want to.

In The Demon King which is the first book set in this world as a whole, we follow the princess, and then we follow this kid that is the head of a gang. It’s all about her trying to survive and get out of all of these dangerous political situations that are happening.

There’s also a threat from another country that is to the south of them, and there’s a big to do with wizards trying to gain more power, and that being a bad thing, and that whole mess.

Like, definitely read Flamecaster, and then read Shadowcaster because this book is set after Flamecaster and also has some crossover. So don’t do it. Just read them all in order.

In this one we follow a girl named Alyssa who goes by Lyss. She is a princess to the Fells, but she is more of a warrior type princess. She does not take to political maneuvering at all.

She doesn’t like it. She just wants to go and smash something with her sword, and for Alyssa, she was never supposed to be the heir to the throne. Her older sister Hana was supposed to become queen, but Hana was assassinated at some point before the first book. So we follow Lyss and her having to fill the role that her sister was supposed to fill.

We also follow a character named Hal, and he is the son of one of the advisers to the king of a different Kingdom in this world. His family has actually fallen out of favor, and so Hal has to survive being put into positions that could get him killed. 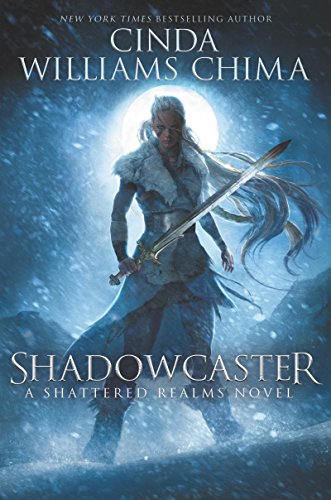 And Hal is also discovering that his country is not the nicest of countries to be from. His side of things is not the only way to look at everything, and he’s starting to learn and to be open to learning from all the characters that are surrounding him. And we also follow a character named Breon or Bre, and he is another person that has a mage mark on his neck. And when I found that out, I was like, “Oh shoot.

What’s going on?” Because with the things that happened with Flamecaster and Jenna having the mage mark on her neck, I was like, “Oh shoot! What is going on?!” So you follow those three mainly, and then you also have some crossover with the first book.

That’s why you need to read Flamecaster first, and then read this book.

My first pro for this book is that I really just enjoyed all of the characters. I thought that they were all equally compelling, and I didn’t think that one character was more interesting than any other character.

I really liked Lyss as a character. Iit kind of got back to the roots of the original series because in that series you also follow a princess. I really liked Breon as well because he was just a little street rat, and how unlucky he is just is so funny to me. And I also liked Hal as well.

I think that the characters that I really liked the most are probably Breon and also Julianna which is kind of surprising because I didn’t think that I was gonna like her all that much. Julianna is Alyssa’s cousin, and she is a lot more politically savvy.

She is able to kind of manipulate all of these people and do things politically that Lyss just isn’t capable of doing because Lyss doesn’t have the patience or the ability to – I don’t know – smooth talk, I guess. I just really want to know what’s going on with Julianna because I don’t know if she’s evil or not. Like, I don’t know if she’s actually on Lyss’s side or not.

There’s something fishy going on with that whole situation. I definitely was very zoned in on Julianna, and I really want to know more about her as well as how she feels about Lyss and that whole thing. Loved that. I love that this book fills in the gaps of what happens in Flamecaster.

Flamecaster mainly takes place in a different place than the Fells, and this one goes back to the Fells and fills in all of the details of what went on in this place of the world while the events of Flamecaster were happening.

But because of that there are some time jumps kind of like the first book, and I didn’t love those as much because they are quite jarring and you don’t really know where you’re at in the story once those happen. But I did appreciate them, I guess, because they did fill in all of the information that we were lacking.

Now I’m like, “I need the next book right away!” The third one does come out this year, so I won’t have to wait that long. But still I was like, “Ah!! No, I want the next book.” Cinda Williams Chima just has a very addicting writing style, and I can just speed through her books so fast.

And I just loved them so much. I really loved the Jenna crossover that was happening in this book. 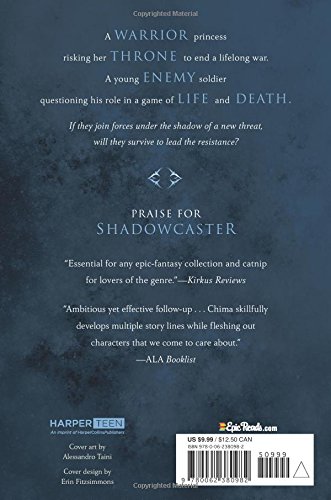 Finding out what happens to her after that book was very needed. I’m very glad we got that. I love that the magic system of this world is more complicated than I originally thought it was, and we actually start to delve into the different types of magics and what is kind of going on with that what is happening with these mage marks, why are they on these people, all of those sorts of things start to get teased out a little bit more.

A pro for Flamecaster that carried on into this book was that she’s expanded this world so much, and I really love that this conflict between the Fells and this other country – I can’t remember what it’s called – Arden has grown and actually has a lot more sides to it than just the Fells versus Arden.

They’re getting sucked in. It’s just a huge mess, and I’m loving it. One thing that I found that was really interesting was – you know how when you know something but the characters don’t know something, so there’s tension growing because you’re like, “What’s gonna happen when they find out X or find out Y?” – the characters find out those things in very normal times. Like, it’s not this huge deal, so a lot of the reveals didn’t end up being some huge blow up arguments or anything like that.

I found that that was really interesting and was something a little bit unique because a lot of books will take advantage of those tensioned information sessions, I guess, and build up to them, and this book doesn’t really do that.

So I ended up really liking that. A lot of the characters in this book are just not very dramatic, and I appreciated it.

Now let’s talk about a couple of cons.

I didn’t find the ending of this book to be as crazy as the first book or as crazy as books usually end it that makes sense. I liked the ending, but it wasn’t that big of a deal. And I feel like it was supposed to be a bigger deal, but I didn’t think it was that crazy.

And the only other thing was that the characters… it seems like they’re all gonna start off, and have their own things going on and, then meet up, but they meet up very quickly. And there’s not really that much independence within the characters.

So you end up reading the same basic plot – all the characters are on the same journey – and you’re just reading it from different points of view. I wish that they had stayed a little bit more independent for longer so that you get to know them individually instead of getting to know them in how they interact with each other if that makes sense. 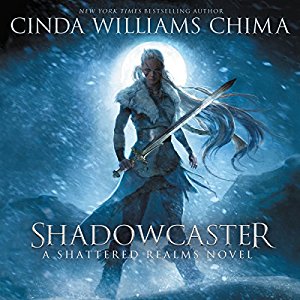 Not a huge con at all but one nonetheless, and then also I mentioned the little time jumps at the very beginning of the book, kind of, were jarring. I didn’t really like those all that much.

But it’s still really, really good. It’s kind of how the third book in the Gentleman Bastard series isn’t as good as the first two but still amazing. Kind of the same thing. As I said, it is so entertaining. I absolutely loved it while I was reading it, and I read it so quickly.

And yeah! S that’s gonna be my review on Shadowcaster by Cinda Williams Chima. If you liked it, please give it a big thumbs up and comment down below if you’ve read this series.