Hey! What’s up, you guys? It’s promotekdbook.com, and today I’m gonna be doing a book review on The Black Tides of Heaven by J.Y. Yang.

If you guys don’t know, “The Black Tides of Heaven” is a silk punk novella which is basically where the setting has a lot of Chinese influences but also has some cool technology that’s going on.

This novella follows two twins that are the children of the Protectorate who is this, I guess, kind of Empress of this world. She has such immense power that everyone is basically terrified of her, and she controls pretty much everything.

The twins’ mother had promised the Grand Monastery that she would give one of her children to them, and so instead of just giving one of the twins, she ends up giving the monastery both.

It also allows them to use certain technologies within their world, and a lot of things like transportation are done by manipulating the Slack. A thing about this world that I found that was really interesting is that children are born without a gender.

They have genitalia and everything like that, but they don’t confirm until later on when they feel that it’s right.

You can confirm at a very young age that you’re either male or female, or it may take you a long time and you could confirm when you’re 20. And it’s also perfectly okay if you don’t confirm at all. All children are referred to with “they & them” pronouns until they are confirmed.

Mokoya is one of the twins, and she is actually a prophet which is a very rare gift in this world. But it’s more Mokoya’s twin Akeha that we actually follow in this novel. Both of them are able to use the Slack very well, but you follow Akaha a little bit closer than you do Mokoya. Sorry if i pronounce their names way wrong!

My first pro for this book is just everything that I’ve already talked about. I absolutely loved this world! I thought it was so interesting.

Even just for it being a novella, it actually has a map included. It is so cool, and you can definitely see exactly where the characters are and where they go as they move throughout the world throughout the story. 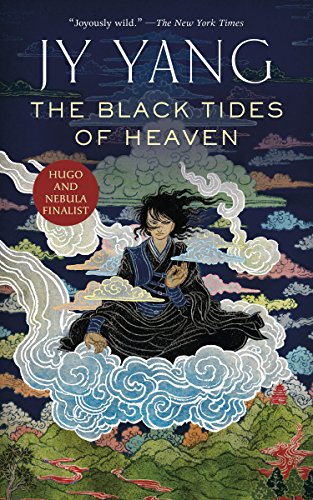 The Black Tides of Heaven by J.Y. Yang Kindlecover

I really liked learning about the Protectorate, and the Tensorate, and all of these different groups of people that are vying for power and are trying to control the most land, and the most people, etc. That power struggle and that dynamic were all very interesting to learn about especially through the eyes of these two children and then as they grow up.

I thought the Slack was a really cool magic system as well. The different fundamental energies are associated with different elements of the earth. I thought that the main characters’ abilities to manipulate these things and to get things done were fascinating, and I think that one of the reasons why I was so intrigued by this magic system so much was that it can do very subtle, very beautiful things but also extremely dangerous and just horrid things.

And it’s also interesting to see the different groups of people that are in this world use the Slack in different ways and kind of view the Slack in different ways. Some people are more respective, more religious about it like the Grand Monastery, and some people think about it more as a tool which is kind of like the Tensors. So I really enjoyed all of that. The world-building was awesome.

Definitely a big pro. Akeha and Moko were both characters that although they wanted different things, I wanted both of them to have the things that they wanted.

Even if you choose a gender that’s not aligned with the sex that you’re born with, having a sex change is not considered this huge deal. They just take care of it so that you can be the person that you are inside. I don’t consider someone’s gender identity to be a big spoiler.

And although they are twins, it’s totally fine that they choose to be different genders because that’s who they are. I will say though that reading with everyone being they/them pronouns was a little jarring at first because I’ve never had a book do that before. So it was a little more difficult for me to get through the story because I was assuming that people were doing things together which I shouldn’t have assumed.

But it was a little hard to get out of that mindset and to identify these children individually as they/them instead of them doing things together as a they if that makes sense. But that was just something that I had to deal with, and you may not have that problem.

And the last thing that I’m gonna talk about because I don’t want this post to be too long is that I loved that this book talks about doing what’s right and being true to yourself. It would have been easiest for the twins to both confirm is the same gender.

The Black Tides of Heaven by J.Y. Yang Paperback

It would have been easiest for Keha to take this road instead of that road, but being true to yourself pushes you in the right direction. It makes you want to do the right thing, and so I really enjoyed seeing both of the twins be true to themselves and choose the best paths for them which also ended up in the best path for the world in general.

Now I’m going to talk about a couple of the cons that I had. One thing is that in this book, because it is a novella, is not that long.

They use time hops to accomplish more things and to cover more material, I guess, and the time hops could be a bit jarring because you would jump from one time in the twins lives to another.

It is the definition of insta-love. When they meet the person that they are going to be with, it is, like, immediate that they are in love and gonna be together, and I didn’t like that. I forgot to mention that the author Yang is non-binary, so reading about children that are not defined as either gender from a non-binary author was pretty awesome.

And I really enjoyed that as well. That should have been in the pros, but I forgot about that.

In the end I really, really enjoyed this novel. I ended up giving it four stars because it is super entertaining. I really liked the world. I really liked this silk punk vibe because I’ve never read a silk punk novel before, I don’t believe, and I definitely want to read more as well as continue along with this series of novellas.

And I definitely recommend this if you’re looking for something that is silk punk or something that gives you a different vibe than anything else that you’ve before. So that’s gonna be my review of “The Black Tides of Heaven” by J.Y. Yang. If you liked this post, please give it a big thumbs up and comment down below if you’ve read this novella before.

Are you interested in reading it now? Do you have any recommendations of something that may be similar to this I know that Ken Liu also writes silk punk novels, but his are quite chunky.