Today I’m going to be doing a book review on a Burn Baby Burn by menu Meg Medina.

This is a young adult novel that came out earlier this year in March.

As you can see I have an advance reader copy of this book that was sent to me by Candlewick Press.

But I didn’t get around to reading this book before the book came out, so I picked it up during the booktubeathon and I really enjoyed it.

This story takes place in 1977 in New York City and you are following this girl named Nora as she is sort of starting off on her final year of high school.

1977 is kind of a notorious year in New York City history if you aren’t aware.

It’s when the Son of Sam serial killer was going around and killing young couples throughout New York City.

There was a major heat wave happening in New York City at the time.

And there was also an infamous black out that happened in New York City at the time that led to a lot of violence and looting in the city.

So there’s already all of those factors being put into play here.

But there’s also just Nora’s own personal life that she has to deal with.

Like I said, she’s you know, going through her senior year of high school trying to figure out what she’s going to do following that year.

Whether or not she’s going to just start working and move out of her house or if she’s going to attend some sort of like technical school or college or something like that.

She also has a lot of personal problems.

Her brother is extremely violent, gets into a lot of trouble, her parents are separated and her dad only seems to call on holidays.

And when they do call, it’s all just like superficial stuff.

She doesn’t feel like her dad actually knows anything that’s going on in their families life.

And then Nora also works at a deli part time and there is a new guy who starts working there as well.

And she basically get a crush on him.

So there’s just a whole bunch of different things that Nora is trying to handle throughout this entire book.

I really enjoy Meg Medina as a writer a lot.

I feel like she’s completely underrated and I want more people to pick up her books.

The reason why I love her book so much is because she covers an aspect of teenage life and the teen world that I feel like I don’t see very often in young adult books.

And I really enjoyed that one as well.

I think I liked this one even more.

In that one she talks a lot about bullying, which was handled so very well.

And then in this one she isn’t talking about some like really large topic in the whole thing, but it’s just sort of like all these different pockets of being a teenager and growing up that she cover so, I feel like, realistically and accurately.

Nora’s family is a little bit poor and her mom has a job but it doesn’t pay very well and she’s very scared about getting laid off.

And so that’s part of the reason why Nora has her own part time jobs, to sort of like help out around the house.

And then her brother Hector is extremely violent.

I think one of the reasons why I enjoyed this book so much, well enjoy being like I found the experience so much richer, is because Meg Medina create such tension in this book with the character of Hector.

He is so violent and so terrifying and I felt like every time there was a scene with Hector in it, I was terrified for Nora and her like well being.

I thought there was a chance that he was gonna like kill her at certain points because he’s so just out of control.

It was insane like I really did feel my chest tightening up every time that he was in a scene because I had no idea and, you know, the characters and you have no idea what Hector is going to do at any point.

I feel like he was just so well put together. 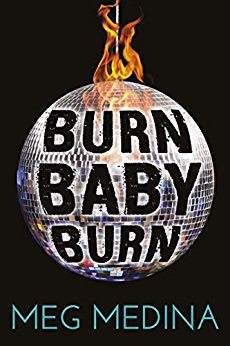 One of Nora’s best friends in this book is girling Kathleen and Kathleen’s dad is a firefighter.

I just really love this book and the fact that Meg Medina decided to set this in the 1970s and specifically in the year of 1977 just adds sort of like another layer to the story where if you have knowledge of what was happening you know that this was an extremely turbulent time in New York City history.

And so the tensions of Nora being this 17, 18 year old girl wanting to go out and explore the city but also be completely terrified of the city around her is this completely like natural battle that you would expect someone to have during this time period.

I just really enjoyed this book, it’s so, so well done.

If anything I wish this book could have been a little bit longer.

I could have easily taken a book like this that was like 400 or so pages long just to go a little bit deeper into all the different characters.

She recognizes that there are just certain problems that don’t get solved within the course of a few months or a year or whatever.

I highly recommend it, especially if you’re someone who likes realistic fiction.

Whether or not you like young adult or not, I feel like if you’re someone who likes contemporary stuff or if you like sort of just realistic fiction then this is definitely one worth picking up.

So yeah those are my quick thoughts on Burn Baby Burn by Meg Medina.

If you have read this book, feel free to leave a comment down below letting me know what you thought of it.

Or if you read any of Meg Medina’s other books definitely leave a comment about that as well.

I believe there’s one more novel that she has out that i have yet to read.

But it’s definitely going on my list of books to read.