The Astonishing Color of After Kindle Edition BY Emily X.R. Pan

Hi everyone. I’m Maria and this is promotekdbook.com.
Today i’m going to be doing a book review on the astonishing color of after by Emily X.R. Pan.
This is a brand new release. It’s coming out this week or just came out this past Tuesday and I loved it so much that I wanted to film a review of it immediately.

I received a digital copy of this book from the publisher through edelweiss and then I also received this physical copy from Book of the Month.
So I was able to read it ahead of the pub date. And yeah, it’s one of my most anticipated reads of the year and it did not disappoint me, which is always so great.

So in this story you are following Leigh Chen Sanders who is half-asian half-white.
At the beginning of this story we find out that her mother has committed suicide and Leigh is extremely, obviously, distraught over that. But she’s also extremely upset because at the time when her mother was committing suicide, she was at her best friend’s house who was also her like longtime crush, Axel, and they were having their first kiss. 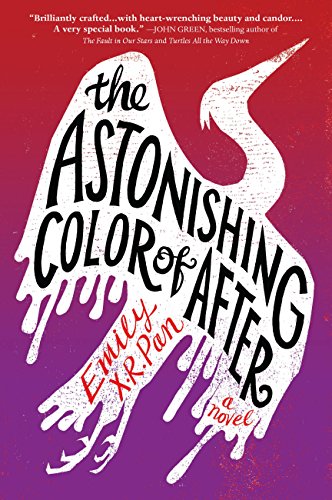 The Astonishing Color of After

So the story just follows Leigh as she deals with her grief, as she learns a lot about her mother’s side of the family, which she didn’t know anything really about.
And you also follow her as she tries to figure out what exactly her mom is trying to tell her and lead her towards.

So like I said, I really, really enjoyed this book.

This is a debut young adult book and I think that it is just so well done.
I will say off the bat that there are obviously magical and magical realism elements to this book.
So if that is something that you generally don’t enjoy, you are definitely not gonna like this book because it is very heavy.

There’s a lot of like just complex emotions that are tied up in grief and you are forced to confront when someone you love passes away.
Especially when they pass away in a situation like this where you wonder if there’s something you could have done or if there are things you should have noticed or changes that could have been made in order to prevent something like this from happening.

Emily X.R. Pan does a really great job of discussing things like depression and suicide and the complexities that come with that.
Even sort of beyond that there are also a lot of other really great topics being discussed including what it’s like being an artist and also like following something that’s not a typical or traditional career path when your parents might want otherwise from you.

I think that it was all just handled really, really well.

I cared so much about these characters.
Seeing how Leigh’s relationship with all of these different characters of balls and changes over time as she learns about her family and learns about her past and her parents’ pasts a little bit.

It’s just handled really, really well. Like this book was so surprise like surprising in the way that like you never really know how good a book is ever really going to be.
Especially a debut where you’re like I think it’s gonna be good it sounds really good.

The Astonishing Color of After by Emily X.R. Pan

But until you actually read it, you don’t know. And this book really lived up to my expectations in a way that I didn’t think it could almost.
Again if there’s anything about this book that I think is going to put people off, it’s going to be the magical and magical realism elements in here.

There are scenes and situations in here that require you to suspend disbelief and kind of just go along with the ride. And if you’re not willing to do that then you’re not gonna be okay with it.
And they don’t like over explain everything that happens in here. Which, again, I was completely okay with because to me that’s not really the point of the story.

So yeah, in the end, I think I gave this a four out of five stars. I would probably rank it more like a four and a half out of five stars.
I really enjoyed this book. I highly recommend it. If you’ve had this one like on your maybe list in terms of books to check out, I would say definitely go for it unless again you are someone who doesn’t like magical or magical realism elements in your books.

But again, I think the way that they talk about things like grief and depression and the way the relationships are handled in here, I think that it’s still really worth reading.

So yeah that is my quick review on the astonishing color of after. If you’ve read this book, definitely leave a comment down below letting me know what you guys thought of it.