All Grown Up. Kindle Edition!
By Jami Attenberg (Author)

Today I’m going to be doing a book review on All Grown Up by Jami Attenberg.

This is a new release. It just came out in the beginning of March and I got it in the book of the month box this month.

And I absolutely adored this book. So I wanted to do a book review on it.

In the story you are following this character named Andrea.

She’s single, she doesn’t have any kids.

She’s still kind of like figuring out her life as an adult.

She has an older brother who’s gotten married and has a kid.

And it’s just about her navigating life.

Each chapter is sort of like a short story in her life.

And you jump through time a little bit in this book.

But it’s one of those situations where I felt like it wasn’t that difficult to follow the timeline of the story.

Jami Attenberg also does some really interesting things with storytelling in this book.

So the way it’s set up is like you’ll read a short story about a specific moment in Andrea’s life.

So one example is like towards the beginning you read about Andrea in her like 20 living in this apartment that has like this great view of the empire state building.

And then she like talks about her life a little bit and then you’ll like jump to another chapter that’s later on in her life maybe in her.

And she’ll talk about that a little bit.

And then another story I’ll talk about her as a kid or something like that.

And in all of these stories you’re hearing like references to other parts of her life.

And so she’ll talk about some like small little detail like oh I went to this party that my brother was having.

And then a couple chapters down you’ll read a story about the actual party and find out more details, what had happened that night.

And it’s sort of like you’re getting all of these different little puzzle pieces about Andrea and by the end of the book you sort of had this whole complete life or at least a complete life up until like her forties.

And I thought that was such a clever way to tell the stories because when you’re reading the stories, you hear all of these little details and they’re all sort of talked about as throw away details.

And then later on they get fleshed out more and you realize that they’re not really throw a details.

They’re all really important moments in her life.

And I felt like that kept the story so fresh and so interesting and provided so many layers to this character.

Another thing I really liked about the story is the fact that it’s really raw and honest in a way that I wasn’t really expecting.

Andrea as a character could probably be characterized as an unlikable character but I think that’s just because you see all of her, the good and the bad and ugly.

And so in the way that like everyone is basically an unlikable person in some respects, Andrea is definitely that and you see all of it. 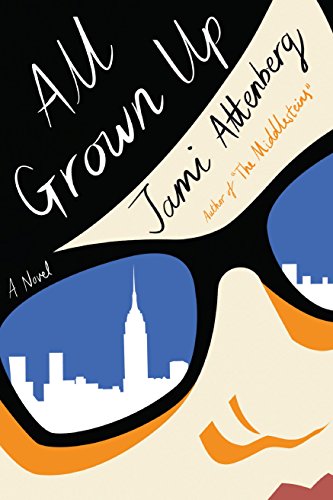 All Grown Up by Jami Attenberg

And it’s so honest with the reader in a way that you don’t really see very often I think in books.

There were points in this story that Andrea expresses things that are so honest that A actually had to like take a break for me because there was like a gut punch in its realness and honesty.

A lot of the story talks about Andrea being single and the various guys that she like meets throughout her life.

And I think that, especially as you get older and as someone who is 30 and still single, I think that there’s a lot of realness in this book about what that lifestyle choice is like.

And I think it’s like one of the first or one of the few explorations of a sort of older single life in fiction at least that I’ve seen that has made it seem like it wasn’t like a detriment completely to her life.

Andrea is also an artist.

Even though those aren’t necessarily things that I struggle with, I feel like it was just so honest about those situations that it was impossible not to feel something for the main character.

I was so blown away by it.

I don’t know if everyone’s going to be quite as impacted by this book is I necessarily was.

But I just found it to be such a great example of a well-rounded character that I feel like if that is something you’re into, you will definitely be into this book.

Yeah there’s so much that’s going on in the story that it’s hard to talk about it all without just like going through it chapter by chapter because I feel like each chapter has its own story and its own reveals and its own just like well-crafted storytelling techniques that I could just break it down for so long.

But I don’t want to just know ramble about this book for ๑๐ minutes at people who probably haven’t read the book yet.

I highly recommend it.

It’s definitely up there as one of the best books I’ve read so far this year.

It’ll probably be on my favorites list at the end of the year.

I’m just so impressed by this book.

I read Saint Maizie by Jamie Attenberg when they came out.

And I really enjoyed that book.

This is even better.

Like this is one of those books that you can tell that Jamie Attenberg worked very meticulously on.

So yeah those are my quick thoughts on All Grown Up by Jami Attenberg.

If you’ve read this book, definitely leave a comment down below letting me know what you guys thought of it.

Or if you have any questions about the book definitely leave a comment about that as well and I’ll try my best to answer it.

But I definitely think that’s a book that needs to be on more people’s radar.

Jami Attenberg has been like stepping up her game with each book, I feel like, and this one is her best yet.