Today I’m going to be doing a book review on Homegoing by Yaa Gyasi.

I realize that in my wrap up I mispronounced her name.

Hopefully I said it correctly this time. If you saw my wrap up, you already know that I absolutely love this book.

The other one was Honor by Elif Shafak, which is currently sitting behind my head at the moment.

Homegoing comes out on Tuesday, June 7th, which is just a couple of days away by the time this post goes up.

I got a copy of this from Edelweiss.

But this is a book that I’m definitely going to be picking up in hard copy and it’ll probably go like right here so it can be in all my posts like all of these other favorites.

This is a debut novel and it is one of the buzziest books that’s coming out this year.

It got a huge advance so I feel like I’ve been hearing about this book forever.

And so I went into it being super skeptical about whether or not I was going to like it because usually these big, buzzy, literary books generally don’t appeal to me.

Especially I feel like the bigger the advance, the more likely I am to not like it.

I think it’s because the hype gets so big around a book that I go into it super skeptical.

But surprisingly, this book actually lived up to the hype for me.

This story starts off in the 1700s in what will soon to be Ghana.

And you are following this family over the course of about 300 years.

In the beginning you are following these two sisters named Effia and Essi.

They actually don’t know that they exist.

I believe that they’re half sisters as well.

Effia ends up marrying this British man who comes to Ghana and lives sort of this life of luxury.

While Essi lives in this other village in Ghana and her family sort of goes down a completely different path.

And you are just following these families generation by generation.

In each chapter you are getting the perspective of a different family member.

And every 2 chapters sort of goes down a line of the generations.

And so you get to follow these two completely separate threads.

One of them as they are enslaved and taken over to the United States and another thread that stays in Ghana for the most part.

There’s so much about this book that feels like it shouldn’t have been for me but yet it’s so well done that I completely loved it.

I’m generally not a fan of switching perspectives, especially switching in every chapter.

Because I feel like that in general changing point of views all the time either one, doesn’t provide me with the depth that I want in the story, or it leads me wanting to read more about certain characters over others.

But what Yaa Gyasi is able to do in this novel is not only provide you with the point of view of whatever character that you are following in that chapter, but each chapter also provides more information about the past.

So it feels like this never ending thread that you are following.

And in general each chapter just sort of follows these characters for a chunk of time, but there’s still so much information that is provided to you about the previous generations within that chunk of time.

And you also get to put the pieces of the puzzle together, seeing how X event leads to Y event or how the events something two chapters ago leads to the events that happen now and you can see that leading to the future events.

It’s just completely mind blowing how well this novel is put together.

Just following the family tree down this line and seeing how it all wraps up in the end.

I was so ready to like be unsatisfied by the ending because it was like you follow these threads as they go down and it feels like they’re just two completely stories and yet they’re still so connected to each other even though the relationship between the characters are getting father and farther apart.

It was just, it was so good.

I can’t just stop talking about how good this book was.

There’s just so many things to talk about with this book.

I’m gonna try my best to just cover a couple of highlights here.

I love the fact that you get these sort of glimpses into history while you are also learning about these characters.

You get to see a lot about what’s happening in Ghana over the course of these couple hundreds of years.

And you get to see sort of how these characters play in the history of the United States.

As someone who knows American history, obviously because I grew up in the United States, it was nice to see how Yaa Gyasi incorporates these characters into those moments in history.

I really love the fact that you get to see how the consequences of one character sort of has sort of ripples and affects throughout multiple generations, not just the one like directly under them.

I liked how you got to see that so much of these characters’ lives are so cyclical.

You see similar mistakes being made.

You see similar personality traits being passed down.

You got to see similar almost paths being taken.

Which feels so weird because it feels like that’s something that isn’t really discussed or talked about very much.

But because she’s covering this big span of time, you get to see how there is this aspect that’s in people that comes from like your own family background.

It’s not just, you know, nature, it’s also nurture as well and just playing with that as well.

All of the characters that are presented in this book I feel like are really well developed characters, which again, is something that I was not expecting at all because it changes perspectives all the time. 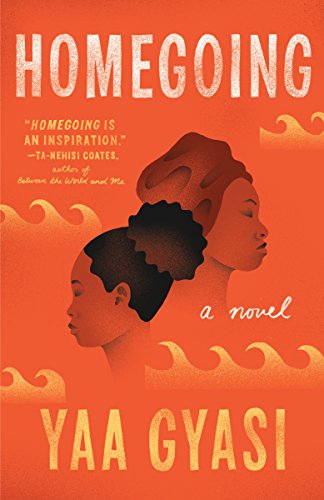 There is a lot of depth and complexity to all of them.

It’s interesting to see like what information gets shared with different characters and what doesn’t.

And the reader definitely knows a lot more about the family history and what’s going on than usual the characters do and it’s interesting to see like what gets revealed and what doesn’t and what stories get passed down through the generations.

This book is also a really difficult read, which I feel like I have to say.

Yaa Gyasi does not shy away from difficult topics with these characters.

But despite all of that, I found it to be also completely compelling.

I didn’t want to put the book down.

One recommendation that I got prior to reading this book that I would definitely pass along to other people if you are planning on picking up the book is to read at least a generation at a time.

So read at least two chapters at a time together so that way you can sort of see what’s happening in the same like years almost.

Or what’s happening within the same generation.

If you have to put down the book, which most people probably will at some point, put it down after you finish every generation.

So usually it’s about 2 chapters each.

And I think that really helps you as the reader to get a sense of what’s happening in the bigger world as well as the smaller world of these characters.

And I think that made it so it wasn’t super confusing.

In the e-version that I got of the book, and I’m assuming it’s going to be in the hard copy as well, there’s also a family tree.

So I actually flipped back and forth between the family tree and the chapters to sort of understand the relationship I was going to be following.

So yeah, this is just such a fantastic book.

I’m definitely going to be picking up a copy on Tuesday.

I’m so excited to own a physical copy of it.

And I cannot highly recommend this book enough.

It’s a big buzzy book for a reason.

This is one that seems to be living up to the hype.

So yeah, that is just my review of Homegoing, the best that I could do of it.

And yet I was still able to devour this book in like 2 or 3 days, which again, is just amazing what Yaa Gyasi has done with this book and I am very interested to see what she’s going to do next.

Hopefully her second book lives up to it.

So yeah, those are my quick thoughts on Homegoing.

If you’ve read this book, feel free to leave a comment down below letting me know what you thought of it.