The Trespasser: A Novel Kindle Edition!
By Tana French (Author)

Today I’m going to be doing a book review on The Trespasser by Tana French.

This is the sixth book in the Dublin Murder Squad series.

If you’ve been watching me for a while you know that I am a big, big fan of Tana French and a big fan of this series.

As I’ve mentioned before, it’s not required that you read any of the other books in the series.

They all work perfectly a standalone but there is a connection between all the books.

So the main detective that you are following in this book is Detective Antoinette Conway who you met in The Secret Place, which was the fifth book in the series.

It’s her as well as Steven Moran who was the main detective in the fifth book.

Antoinette Conway has been working on the muder squad for a couple of years now and she is not liked at all within her department.

She has to deal with a lot of harassment, a lot of pranks.

She gets a lot of the really crappy cases.

Her partner, Stephen Moran, is probably the only person in the entire department that she can actually trust.

And so they generally get you know the lower level murder cases.

So one day Antoinette and Stephen are like finishing up their shift.

Then a murder case comes across their desk and so it looks like it’s going to be your run-of-the-mill domestic case.

There is a young woman who was found dead in her house.

The main suspect in the case is her boyfriend and so everyone in the department is basically pushing for them to arrest the boyfriend to charge him for the murder.

But there’s a couple of things that seem to be rubbing Antoinette the wrong way.

One, she recognizes this girl from somewhere but she’s not exactly sure where.

The second is that everything isn’t really lining up the way that it normally would.

And third, she’s starting to wonder whether or not this is like some sort of prank or some sort of harassment, if people are trying to set her up to fail with this case.

And so she becomes more and more paranoid as the book goes on and she starts to not even be sure of what is real evidence and what’s been tampered with and what she can trust and believe anymore.

So I read this book with Sabrina from unmanaged mischief and Olive from a book olive.

I’ll have links to their book down below.

And they were not big fans of this book.

I was a big fan of this book.

So it seems like Tana French is taking a lot more risks with her Dublin murder squad books and trying things out and experimenting, which personally I’m really enjoying.

The thing about Tana French’s books that I really love is the fact that she just creates mysteries that are interesting but it’s not the mystery themselves have pulled me and it’s the detectives.

She creates really interesting characters and in all of her books that really draw me in.

I think you get really interesting point of views in all of her books and just following people’s just psyches is just so fantastic.

The reason why I love this book so much is because you’re completely in Antoinette’s head the entire time.

And so I feel like as a reader I started to get paranoid for her as well.

Like I had no idea what information I could trust in this book or not.

Normally you can follow sort of like the path that you’re going down, you might not be able to solve the mystery necessarily but you’ll at least see how they get there in the end. 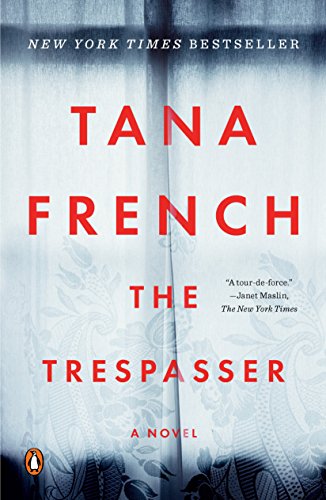 The Trespasser by Tana French

This book I had no idea where it was going to go.

Like I got to like the 70% or 75% mark and i’m still so confounded by this story because it’s so hard to grasp what is truth and what is not truth.

Because you’re in Antoinette’s head the entire time and she’s starting to get more and more paranoid about things that are going on.

So as a reader you start to get paranoid and second-guess all of the clues that are coming in.

And it just, it was a mystery until like almost the very end.

This is a really slow moving book for the most part.

So that’s something that definitely will not be appealing to a lot of people.

Especially if you’re someone who’s read Tana French’s other books, a lot of those books are very like plot heavy, very fast paced.

This one is a slow burn and it isn’t until the last 20, 25% of this book that the plot really gets moving and you start to see the mystery start to wrap up.

So I can definitely see that getting on people’s nerves with this one more than the other books.

But still I feel like the mysteries aren’t the point with Tana French’s books.

I really like this book. I think Antoinette Conway is probably one of the best protagonists that Tana French has written about.

I feel like Tana French is just one of those authors you have to read for yourself but don’t go in expecting typical mystery stuff because she is 100% not a typical mystery writer in my opinion but I also think that’s why she’s so fantastic.

So yeah those are my quick thoughts on The Trespasser by Tanaf French.

If you’ve read this book definitely leave a comment down below letting me know what you guys thought of it.

I know a lot of people are starting to pick up Tana French’s books and so I know they’re quite a few people who have read this one so I’d definitely love to hear your thoughts.