We Gon’ Be Alright: Notes on Race and Resegregation. Kindle Edition!
By Jeff Chang (Author)

Today i’m going to be doing a book review on we gon’ be alright notes on race and resegregation by Jeff Chang.

This is an essay collection and I absolutely loved it.

If you saw my August wrap-up you would have seen that I gave this book a out of stars.

It’s the only five-star book I’ve read so far this year. Yeah this book was everything for me.

So just know in advance this is basically going to be a rave more than a review.

So yeah, like I said, this is an essay collection, subtitle basically gives it all away.

This is a collection of essays about race and resegregation in here in the United States.

It’s not a very long book by any means but Jeff Chang is able to provide just so much information and context to the way that the United States is right now.

It’s so, just so well done. He starts off talking about, I think the title of the first essay is like, “is diversity for white people” and talks about how diversity is a thing that generally people in marginalized groups talk about significantly.

But he talks about how it affects sort of everything and that even if you don’t fall into one of these marginalized groups, it’s also for your benefit as well.

And then he sort of goes on to talk about things like student protests and the rise of them.

There was sort of like the slow rising of tension happening around various college campuses.

And then he talks about sort of the resegregation of our cities and suburbs.

And, but also like how within suburbs there are very clear racial lines a lot of times and how that affects our own points of view about the world around us and how the resegregation leads to things like Ferguson happening.

I wasn’t quite prepared for that.

Like what I really, really loved about this book is that he provides you with all of the connections.

He also talked about things like black lives matter movement obviously, he talks about oscarssowhite and representation and media really well and he ties all of it together.

Like none of these things are events happening in silos, like they’re all affecting each other and they’re all leading to each other.

Like all of these are causes and effects for everything else that’s happening in the world.

The final chapter in here is specifically talking to Asians Americans, which is so, so good.

Because Asian Americans oftentimes are what he describes as being like Inbetweeners.

Like we’re not white but we’re also not black.

And so we try to align ourselves with white people.

I say we because I’m Indian American.

But you know he talks about how there is a sort of like rejection happening in the asian-american community where we try to distance ourselves from that sort of racism.

But we need to stand up and speak out as well and recognize the things that are happening in this world and have a say in all of it.

And to also not only have a say in it, but also recognize our part in it and how we are making the situation worse sometimes.

It does help if you are slightly aware, I think, of at least like the basics of the movements like Oscars so white or black lives matter because you’ll be able to put that stuff in context yourself.

But I don’t think that’s required at all.

There’s so much in here that I’ve underlined and highlighted and just marked for myself to remind myself and convict myself of the actions that I need to be taking.

This book, while it recognizes all of the problems that are occurring here in the United States, it’s also an extremely hopeful book and says that just because things are this way now and these events have occurred.

It’s basically here’s our history we need to learn from our history and you know not make the same mistakes again.

Jeff Chang doesn’t pretend like it’s gonna be easy either but I think that he does a really great job of just talking about what has happened so far and how we need to take steps in the future to help the situations that we’re currently in.

There’s two quotes in here that I wanted to read.

The first one says, ending resegregation is about understanding the ways we allow ourselves to stop seeing humanity in others.

It is about learning again to look and never stopping.

So in that quote he’s basically summing up how resegregation has happened and we need to work to break down the barriers that we put between ourselves and the people different than us.

And different can mean anything.

You know, all of those things. We as humans tend to gravitate towards like-minded people.

People from similar backgrounds and whatnot and Jeff Chang basically talks about how that leads to all of these problems and recognizing that a lot of these problems come because we all have these prejudices in our heads.

And it’s with surrounding ourselves with people who are different than us then we recognize that our prejudices are incorrect basically and that everyone is just a human being who deserves life and liberty and love and whatnot.

And then the final quote I wanted to read comes from the end of the conclusion of this book and it says, “the horizon towards which we move always recedes before us.

The revolution is never complete.

What we see now as solid and eternal may be disintegrating inward from our blind spots.

All that signifies progress may in time be turned against us.

But redemption is out there for us if we are always in the process of finding love and grace. 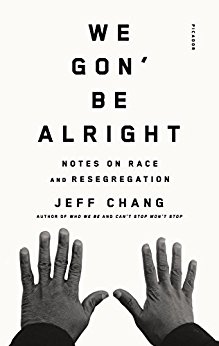 We Gon’ Be Alright by Jeff Chang

So yeah that’s why I say that this book is hopeful.

But I think that Jeff Chang does a really good job in here of finishing up this essay collection by recognizing that yeah, there are problems in the world and yeah, it’s not going to be easy to fix, but you can fix it.

We need to make moves in the right direction and that’s what is going to help in the end.

Like it’s not going to be an overnight thing.

And there are going to be times where it feels like we’re falling backwards but we have made so much progress.

So back in April or May I had the privilege of seeing John Lewis speak.

And one of the things that he always talks about is, he’s always so hopeful about world and about our country.

And one of the reasons why is because he grew up in a world where he wasn’t allowed to like even go to his local library to check out library books and now he’s able to get awards from libraries.

And so he has seen the progress that has been made and even though it feels like right now we’re regressing as a country, he recognizes that we’ve already made leaps and bounds from just like the period that he’s been alive, you know, like the sixty or so years that he’s been alive.

So just imagine like the progress that could potentially be made as long as we continue fighting and pushing and loving others and whatnot.

So I think that that’s like the similar sentiment that Jeff Chang has in the end of his conclusion is, you know, it’s work.

And it’s gonna be hard but we got to keep pushing and we will make progress even though sometimes we will stumble and sometimes we’ll mess up and sometimes it may feel like we’re just punching a brick wall.

But progress can be made if we all just continue to fight in this direction.

So yeah, I obviously highly recommend this book.

I think that even if you are extremely aware of the different modern like black lives matter movement and oscarssowhite movement, Jeff Chang does a really great job of pulling in ties from a whole bunch of different area, so that way he’ll make connection – he makes connections in here that even I didn’t make even though I’m very much try to like stay aware of all these different things.

So I think that even if you are aware of the different movements you’ll still get a lot from this book.

I think that if you aren’t aware of any of these movements or you don’t have a lot of background or history, this is a great one to pick up.

This is just a book that I feel like should be required reading for everyone in the world forever.

So I don’t know if that, is that actually helpful?

Pick up this book.

That’s all it comes down to, pick up this book.

So yeah, that’s everything that I have for you guys this week.

I have a couple more that sort of fit into the same theme that I want to pick up relatively soon.

I feel like these books are really, really helpful for me especially right now when again it seems like the world is falling apart, these books are providing me with a lot of hope and guidance and just sort of reminding me of where my focus should be.

You know when I’m feeling extremely disheartened about the world, these books are helping provide me with the energy I need to keep going.