Hey! What’s up, you guys? It’s promotekdbook.com, and today I’m going to be doing a book review for All Systems Red by Martha Wells.

If you guys don’t know, All Systems Read is a science fiction novella that takes place in a future human civilization where humans have started to colonize different worlds.

Each world is colonized by a different group, so humans have not come together to colonize.

And this takes place on a planet that doesn’t have any colonizing humans on it currently, but it does have groups of teams that have gone to check out the world and see if it’s something that they would like to bid on to colonize.

The main character of this story is a construct which means that the being is created from organic and inorganic material.

Not a cyborg because I feel like a cyborg is a human that then collects a lot of inorganic body parts, and it’s not an AI system because an AI system is just a computer. This is some type of organic inorganic hybrid, but it’s its own entity.

It’s not a mixture of the two. It’s not like it’s half human-half robot. It’s just a construct. This construct is called a SecUnit, but this SecUnit is just for security measures. Its job is to make sure that the team that it’s assigned to doesn’t die and kill itself. 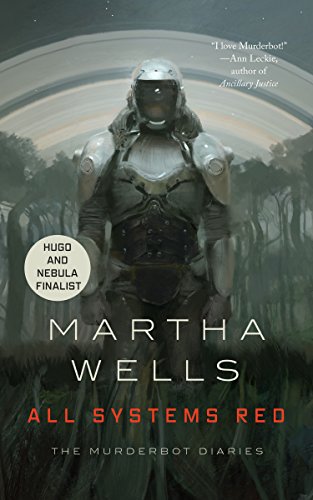 What’s special about this SecUnit in particular is that it hacked its own governor module. It’s able to act on its own volition. It doesn’t have to follow orders if it doesn’t want to. This SecUnit refers to itself as Murderbot, and Murderbot does not care about the people that it’s supposed to be protecting.

It mainly just wants to hang out and watch reality TV shows. As usual with my book reviews, I’m gonna go through my pros, go through my cons, give you my rating, and be done.

My first pro for this book is Murderbot. I loved Murderbot!

I could not help but root for it. It is so funny and so lovable, and I just could relate to Murderbot so much because I just want to hang out and consume stories and because I don’t want to have to deal with people.

However, I didn’t really buy Murderbot’s I don’t care attitude. You can tell that Murderbot has a lot more depth to it than just “I don’t care about humans. I’m watching these TV shows.” It’s a little more complicated than that, and I definitely could relate to Murderbot’s social aversion practices though.

Anytime that someone tries to address it, it turns away. It doesn’t want people to look at it. It doesn’t want a lot of attention, and I can definitely understand that because that is basically how I act in law school all the time.

I never make eye contact with my teachers because I don’t want them to cold-call on me because then if I don’t answer, I’ll look stupid and yeah. So I just keep my head down, and I write my notes. And I definitely can relate to that aspect of Murderbot.

I really, really enjoyed the team that Murderbot is paired with. I really liked pretty much every single character. I thought that they were all pretty interesting and realistic.

I thought it was cool that these people had not interacted with a SecUnit before. Their interactions with Murderbot are a lot different than what Murderbot has experienced in the past. I just really enjoyed all the characters.

That’s actually true for all of Martha Wells’s books that I’ve read. I’ve read the Books of Raksua trilogy plus the two short story collections which are over there, and I’ve also read Wheel of the infinite.

And I enjoy did the characters in all of those books, so she’s very good at making me care about the character she wants me to care about. I think that the world-building that we got was really interesting. 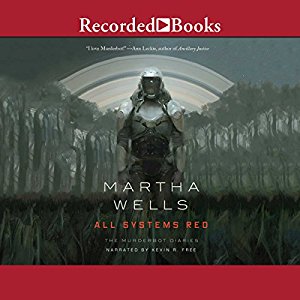 We get some bare bones about what this world is like, and because it’s a novella there’s not really that much space for her to have really concretely built the world-building. Like you do get a little bit of the political setup of this world and how people view AI systems differently depending on what planet they’re from and everything like that.

So we get little tastes of some technology, some political setup, some social constructs, so I really liked that. I think the potential for the series is extraordinary. There are four more novellas that I think are set to come out throughout the course of 2018.

I’m so pumped because this story could go anywhere. She could take this story anywhere she wanted to, and I would be just as excited to read that story. The story of this world could really be taken in any direction as I’ve said like three times in different ways, so I’m pumped for it.

My last book for this novella which kind of relates to the one I just talked about is that I absolutely loved ending of this novella. I thought it made perfect sense. I thought all the characters acted extremely true to their characterizations. I don’t want to go into details more than that, but I did think that the characterization was very consistent. And the ending made perfect sense.

One neutral is that it took me a lot longer to read this novella than I expected it to take me. It took me a couple of days to read it which… It’s only 140 pages, and I’d usually be able to knock that out in like – I don’t know – a couple of hours in one sitting.

But this story benefitted from me reading it slowly, and I think that that’s the way to do it. Know going in that it’s gonna take you maybe a little bit longer, and that’s okay. Now I’m going to talk about a couple of cons that I had. I guess it’s really one con that has a couple of little twigs off of it, but the world-building was very incomplete as I said before.

It makes sense because it’s not a full novel, but I did want more world-building in this. I think that you could also blame the lack of specific world building on the main character not caring to be very observant of the things around it. 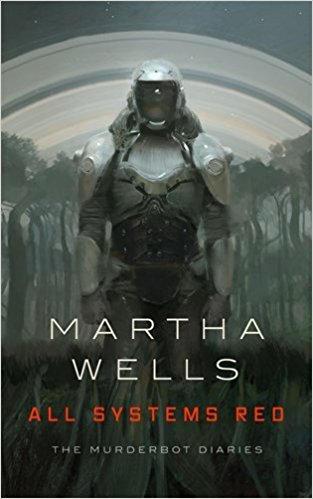 I want to know how different groups of people interact with each other outside of this one group of people that Murderbot is attached to, but you don’t really get a lot of those answers. And I think you’ll probably get them in the future of the series, but I want them now. And that whole world building thing bleeds into a lot of different areas.

Like, I want to know why people are still speaking the way that they are. I want to know more about this colonization process and how that all works. I kept having all these questions, but there were no answers.

Overall, I really really enjoyed this novella. I ended up giving it four stars. I absolutely recommend it. It was so much fun.

I think that the fun factor of this novella just brings it up a notch.