Hey! What’s up, you guys? It’s promotekdbook.com, and today I’m gonna be doing a book review for Strange the Dreamer by Laini Taylor.

If you guys don’t know, Strange the Dreamer is the first book in a YA fantasy series that follows a character named Lazlo Strange. At the beginning of the book, he’s living in a monastery because he is an orphan, and the monastery monks are raising him. He has this huge obsession with this city that no one has actually been to, and people don’t believe that I exists anymore.

The city’s name is Weep, and he has all of this research about weep. He is totally just obsessed and thinks that it is real when no one else believes that it is. The legends that Lazlo has collected all point at Weep not having any contact with the outside world for like two hundred years, and that’s why people don’t believe it exists anymore.

That all changes the moment that this guy shows up in town, and it turns out that the city of Weep is real. It’s in trouble, and Lazlo goes and tries to help this city and help this guy named the Godslayer. It also follows a character named Sarai who’s trapped in this weird living situation.

She and a few other people are trapped on this floating tower, and they are just trying to survive day to day.

Get food. That kind of thing. She’s a very interesting character to follow. I didn’t know too much about this book before jumping into it, and so when I started reading it, I got a lot of Atlantis vibes. Lazlo is very similar to… I think his name is Milo in the Atlantis movie, and they go on a journey to this lost city and all this stuff. So it has a lot of Atlantis vibes, and I was loving those.

As usual with my book reviews, I’m gonna go through my pros, go through my cons, give you my rating, and be done. My first pro for this book is gonna be the writing. I loved the writing style. It was so descriptive and atmospheric. I could picture everything that was happening extremely well.

I had this very concrete image of Weep and of these places that the characters were travelling to, and I could picture the characters in those situations perfectly well. She has a fantastic writing style. Because it is so descriptive, it is a bit slower. 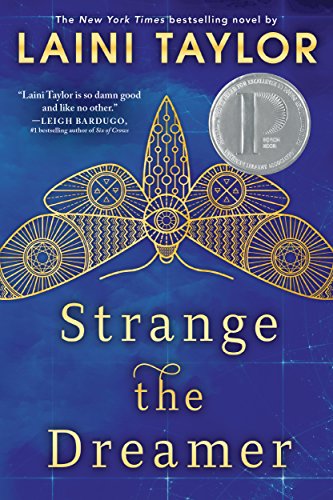 Strange the Dreamer by Laini Taylor

So this is a much slower read than a lot of other books, so just know that going in.

This book spends a significant amount of time laying groundwork for this world, so you really get to get a feel for this world. And you get to understand that this world has a lot of history to it. It has these mythology stories of this city called Weep, but there are other stories as well.

And there are traditions, and cultures, and everything like that. She spent a lot of time world building in this, and I was eating it up because I love world building. Sarai and the people living with her all have some supernatural abilities as well, and I was loving the powers. I was loving learning how they worked and everything like that, so I loved the history, the cultures, the setting, the mythology; the stories.

I just loved the world building in this which really amped up my love for the book because I just wanted to know more, and more, and more. I kind of mentioned this already, but I really, really loved the characters. I thought Lazlo was a fantastic character with a lot of really good traits. He’s a character that you are on his side.

You want him to succeed, and you want him to do well in life. You want him to be happy, and the same case can be said for Sarai. She’s not the greatest of people. She’s definitely done things before that are not the most positive things, but she’s someone that you just root for. And I just loved the main two characters, and I loved a lot of the side characters as well especially the Godslayer’s mother.

She was fantastic. I loved her, and the characters that are with Sarai in this trapped living situation were so good. I really, really enjoyed learning about them as well and that whole dynamic of them being trapped with only themselves. Like, there aren’t that many people for them to talk to, so there’s a very limited population through which to have connection. I don’t know why the lighting keeps changing, so I apologize for that. 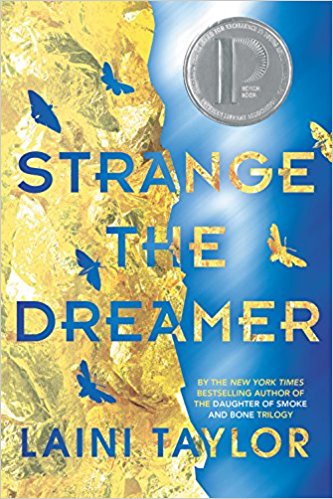 I enjoyed the plot in this novel as well.

It’s not the best, but where the plot a little bit suffers, I think that it makes up for that with the characters, the writing, and the world-building. The plot is slower because she spends a lot of time at the beginning world-building, and nothing really gets going until a little bit later on. And then later on, it’s a lot of journeying.

So the plot isn’t the most intense/the most exciting, but it was very interesting. So I didn’t care that it was slow moving. There’s also some lucid dreaming in here that was happening during the plot, so I really enjoyed that as well because I can lucid dream.

And again it’s just got so many Atlantis vibes, and that is one of my favorite movies, so I was loving just everything about this. One of the main themes in this book is cultural appreciation, tolerance, and acceptance which I thought was absolutely amazing. It definitely harps on if you put in the effort to understand someone, and learn about someone else’s culture, and learn about where they’re coming from, you’re gonna be rewarded in more ways than one.

You’re gonna be able to understand that person a little bit better. You’re gonna be able to make those connections, and people are gonna treat you better in general. That’s kind of one of the main traits that the main character has. It’s that he loves to learn about other cultures, and he definitely puts in a lot of effort into doing that.

And it’s definitely rewarding, and you can see how being accepting of other cultures and learning about other cultures is good for them. And it’s good for you, and it’s just good all around. And I loved that message. The last pro that I’m going to talk about for this book is that I actually read this book as an audiobook.

I borrowed it from my library. I think that the narrator did a really fantastic job. I think that he added to the story and just gave it another layer. The narrator is Steve West. He does a lot of audiobook narrations. he does the audiobooks for Sabaa Tahir’s An Ember in the Ashes series.

And also because it is really slow at the very beginning with all that world-building, all of that is now out of the way. All the groundwork has already been laid, so I think that the future books are not going to be as slow because you’re not gonna have to world-build as much. 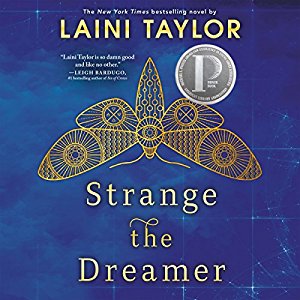 And my second and last con I’m going to talk is that I thought that this book was very predictable. Because it has so many Atlantis vibes, I was predicting a lot of stuff that would happen throughout the course of the novel, and I always ended up being correct. So it’s not the most unpredictable thing ever, but it’s one of those stories that even though you know what’s gonna happen, you’re really enjoying the ride that you’re going on in this book and you’re really enjoying the process.

You really enjoy the journey. It’s all about the journey, not the destination. That really applies here because you do know where you’re headed, but you don’t know exactly how things are gonna go. So it’s a little predictable, but I still enjoyed it. So overall, I ended up giving this book five stars.

I freaking loved this book. I did not expect to love this as much as I did.

I know people loved her other series as well, but I don’t know. I just didn’t expect to absolutely love this, and I do. Obviously after I read it as an audiobook, I went out and sought out this cover because I thought that it was gorgeous and I wanted to physically own it so that I could reread it in years to come.

Definitely, definitely recommend this one.

So that’s gonna be my review on Strange the Dreamer by Laini Taylor. If you liked it, please give it a big thumbs up and comment down below if you’ve read this book. How did you feel about it? If you haven’t read it yet but you’re interested in reading it now, let me know that as well because this is going to be one of those books that I start pushing on other people.